Do you plan on going to a Canadian University? Then here are some more reasons on why you will be making the right choice. 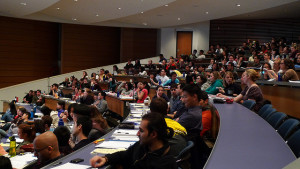 1. No budget cutbacks – Public Canadian universities aren’t experiencing the budget cutbacks as they are in the United States. With a stable economy, these schools are not increasing tuition in double digits. Source: CBS News

2. A hidden jewel – Most Canadian universities are large public institutions, but there is a notable exception — Quest University, an amazing liberal arts college located in a stunning setting in British Columbia. This is going to sound strange to Americans, but Quest is the only private, secular nonprofit college in Canada. About 25% of Quest students are from the U.S. Here is an article from The New York Times about the school. Source: The College Solution

3. Affordable education – The quality of education and living standards in Canada are amongst the highest in the world, but the cost of living and tuition fees for international students are generally lower than in other countries such as the United States and the United Kingdom. As such, Canada is often the preferred choice for students attending college or university. Source: Education au/in Canada

4. A multicultural country – Over the past century and a half, Canada has welcomed 15 million immigrants. Canada is also home to over one million aboriginal people, including First Nations, Métis, and Inuit communities. Canada has a national policy for multiculturalism and works to ensure that people’s customs and traditions are preserved and respected. Source: CBIE

5. You will find a new home, no matter where you are from – Canada became the first country to officially declare multiculturalism as a policy through the establishment of the 1971 Multiculturalism Policy of Canada, which affirms the rights of all citizens regardless of race, ethnic origin, language or religion. This ideology results in a harmonious environment rich in cross-country respect, as well as constantly rising rates of naturalization.

Canada’s diversity is an extraordinary asset in today’s global marketplace, not only because of unparalleled cultural understanding, but also because of the multilingual nature of its citizens. It’s no surprise then that Canada has a reputation as a premiere language training destination. More than one billion Canadians speak English while 250 million speak French. International students improve personal and business fluency through access to unparalleled “English as a Second Language” and “French as a Second Language” programs. Source: Master Studies